Mount Suribachi isn't too much to behold.  A mere 528 feet above sea level at its highest, the most seasoned mountaineers and rock climbers would only consider it a feat should they wish to have a view of the Pacific Ocean and surrounding island.  In February, 1945, however, it was one of the most challenging obstacles to overcome during World War II and in the end, the battle on Iwo Jima would claim 6,812 American lives.

As the United States military strategically advanced in the Pacific to overtake Imperial Japanese forces, bombing runs into Tokyo from the Island of Saipan were proving to be a formidable challenge due to its incredible air defenses.  It was decided that the Island of Iwo Jimo would need to be taken so the US would then be able to have P-51 Mustang fighter planes join up with the B-17 Flying Fortress sorties as escorts.  On June 15, 1944, the US began routine bombing and shelling of Iwo Jima hoping to weaken the dug-in forces and in preparation of a land assault.  This action undoubtedly pushed the Japanese to create an impressive network of tunnels, pill boxes, and gun nests throughout Mount Suribachi which, in the end, became the deadliest point on the island.

Waves of Marines--some 30,000 in the first rush of landing crafts--hit the Southern shores of Iwo Jima on February 19, 1945.  Reinforcements steadily made their way to beach and the ensuing fight would become one of the most tragic in all of the Pacific Campaign.  The tenacity and ingenuity of the Japanese proved to be a force nearly too difficult to handle but the US did not give up.  After the Northern three quarters of the island was cut off from the forces inside Mount Suribachi, it was only a matter of time before American troops were able to overcome Imperial forces.  Four days of near constant fighting seemed to weaken the Japanese enough to make a final push to claim the dormant volcano in the name of the United States.  2nd Battalion Commander Chandler Johnson called up 28th Marine, 5th Division Captain Dave Severance to lead a platoon to the peak of Mount Suribachi and hoist a flag should they reach the top alive. 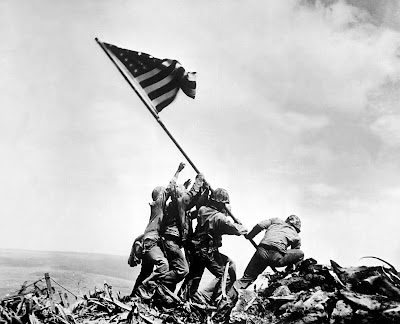 Raising the Flag on Iwo Jima by Joseph Rosenthal (1911-2006) was a black and white photograph taken at the moment a second, larger flag was hoisted on peak of Mount Suribachi hours after the first was planted.  A photographer for the Associated Press, Rosenthal was making his daily trip to Iwo Jima to continue documenting the battle and upon landing, heard that the Marines were on top and about to plant an American flag.  Bulky equipment in hand, Rosenthal scurried up the volcano to snap a few shots of the flag as it flew.  As he reached the top, he discovered that the original, smaller flag had been taken down and larger one was about to be hoisted.  Of the six men pictured--Michael Strank, Rene Gagnon, Ira Haynes, Franklin Sousley, John Bradley, Harlon Block--working together to loft the same flagpole that was originally used, only three would survive the continuing battle that took place on the Northern half of Iwo Jima.

Regardless of first or second flag, the image and later created monument have come to symbolize the triumphs of dedicated and extraordinarily patriotic men and women who served the United States in our Armed Forces.

Their sacrifice for this great nation is breathtaking and inspirational.

As time has gone by, our relationships with Germany and Japan have respectfully solidified into strong alliances.

The United States enjoys its democracy and freedom thanks to the millions of men and women who have donned a military uniform.  To this day, over 650,000 members of the military have been killed in action since the American Revolutionary War.  On this day, Memorial Day, we as a nation stand together to remember their service, their bravery, and their sacrifice.  In solidarity and with humility, with the freedom we enjoy to be able to stand and express our gratitude, we salute and thank each one of you.
Posted by Adrift at 5:45 PM

I am a passionate lover of art, and I sometimes like to share about it with others in hopes of providing a fresh perspective. Welcome to Aesthetic Reflections!

Who am I and why am I here? Most of my life has been spent either working or alone, and it's the alone time where my mind won't turn off. I needed a way to exercise my writing skills while giving my brain a chance to slow down and focus. Since art has long been a source of great enjoyment for me and because I have a lot of experience in writing, I figured I might as well combine the two together so I created this blog. It's my hope that what I've seen, experienced, endured, and learned can, in turn, be shared with you through analysis of works of art in such a way that you get a moment to escape the things in your life that might be burdensome or troubling. I probably won't have all the answers, but I do hope I can at least provide you with some relief. Learning is a never-ending process for me so please do take the time to leave your impressions and feedback about what I've shared. You have my sincerest gratitude.
--Chad Wingerd